Providing treatment for obstructive sleep apnea which causes breathing to repeatedly stop and start during sleep. This occurs when your throat muscles intermittently relax and block your airway during sleep.

Apnea is the medical term used to describe cessation of breathing. There are many types of apnea, however the most common form is obstructive sleep apnea or OSA. This is a serious disorder that affects over 12 million Americans or roughly 2 percent of women and 4 percent of men over the age of 35. In patients suffering from OSA, the cessation of breathing can range from very short, partial obstructions (hypopneas), to longer, complete obstructions that result in a decrease in arterial oxygen saturation (true apneas). In more serious cases this process can occur hundreds of times during the night. As a result patients commonly will wake up feel unrested and be tired throughout the day.

OSA is caused by redundant tissue in the back of the throat most commonly at the level of the tongue or soft palate. The reason patients typically suffer from obstruction exclusively during sleep is that during the day he or she is able to maintain muscle tone to keep the breathing passage open. However at night as the patient falls into deeper levels of sleep the muscle and tissue tone decreases and the tissues can collapse into themselves causing obstruction and cessation of breathing. This disrupts the patients normal sleep patterns leaving them feeling tired and rundown the following day.

The most common risk factor for developing OSA is obesity or excessive weight gain. This leads to accumulation of fat around the airway and a resultant predisposition to collapsing. This fat deposition can also occur with age and with age related male hormonal changes. Other causes of OSA are anatomic abnormalities such as large tonsils or adenoids (most common in children), a recessed chin, and with certain craniofacial syndromes. Patients that use sedatives, moderate to large amounts of alcohol or who smoke can also be at increased risk of developing OSA.

The most commons symptoms of OSA include snoring, gasping and breathing pauses during sleep. Because of this fact, many victims of sleep apnea are often unaware of their problem and frequently are brought to the attention of a doctor at the urging of their partner. Individuals that suffer from sleep apnea typically feel tired during the day and may fall asleep during normal daily activities such as at work, in front of the television or even while driving. Over the long term OSA can cause serious neurological, heart and lung problems.

OSA is typically diagnosed based on a careful clinical history often in combination with a sleep study. This is when the patient spends the night at a sleep lab where several variables such as oxygen saturation, snoring and electrocardiogram (EKG) are carefully monitored. These studies typically stratify patients into mild, moderate and severe categories of OSA based on the degree and frequency of episodes. This aids doctors in developing the appropriate treatment plan.

There are several medical and surgical methods to treat sleep apnea. The first, most simple and often the most effective treatment are lifestyle changes that lead to weight loss. In lieu of this, patients are typically given a trial of continuous positive airway pressure (CPAP). CPAP, which is delivered via a face mask, serves to stent the airway open during sleep preventing obstruction and therefore apnea from occurring. On occasion a deviated septum, enlarged turbinates (ridges that project into the nasal passages that serve to warm and humidify inspired air) or a narrow nasal valve produce obstruction that can preclude use of the CPAP machine and exacerbated OSA. Therefore these issues may need to be addressed surgically in conjunction with OSA treatment.

In children, the reason for sleep apnea is most often related to enlargement of the tonsils and adenoids. Therefore removal of these structures can eliminate sleep apnea in approximately 90% of these patients. Adults may also have enlarged tonsils that contribute to OSA and may be candidates for this surgery as well. Most often in adults tonsil removal is combined with a procedure to reduce excess palate tissue as well. This is known as a uvulopalatopharyngoplasty (UPPP). In carefully selected patients this has a 90% short term, and approximately 50% long term reduction of OSA severity. In patients with more mild OSA or with snoring, less invasive procedures such as using a laser to target redundant tissue such as laser assisted uvuloplasty (LAUP) can be highly effective

If you think you or a loved one is suffering from sleep apnea or have questions about this disease or how its treated please give us a call to speak with one of our specialists. 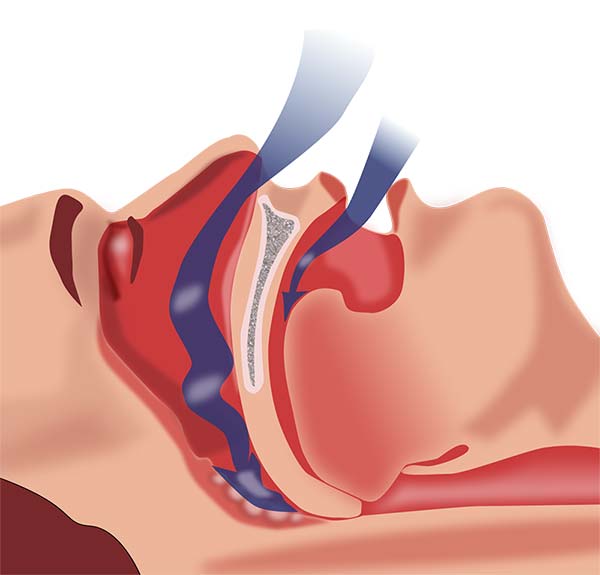